The Old Town Square and the surrounding quarter form the heart of the city of Prague. The lively square is lined with magnificent buildings in different architectural styles, from Gothic to Baroque.

In the fourteenth century the city built around the Prague Castle expanded to the right bank. The history of the square goes back even further: as early as in 1091 a market existed at the site of the Old Town Square.

The square and surrounding streets are pedestrian zones, and during summertime tourists relax and have a beer here at one of the many outdoor cafés while being surrounded by many remarkable medieval buildings. The whole square is bordered by a large number of colorful houses, palaces and churches. Some of the most prominent buildings around the square are the Old Town Hall (famous for its astronomical clock), the Týn Church, the Kinský Palace and the St. Nicholas Church.

The square features buildings belonging to various architectural styles, including the Gothic Church of Our Lady before Týn, which has been the main church of this part of the city since the 14th century. Its characteristic towers are 80 m high. The Baroque St. Nicholas Church is another church located in the square.

An art museum of the Czech National Gallery is located in the Kinský Palace.

Old Town Square apartment offers contemporary rooms within 10 minutes’ walk from the center of Prague. The venue was built in 1915 and refurbished in 2003. The accommodation is equipped with a designated area for smoking, a restaurant and a carpark.

Prague Castle is settled nearby and Prague Astronomical Clock is a 5-minute walk away. St. Vitus Cathedral is 3.6 km from this accommodation. Offering various dining options, Ambiente Pasta Fresca and Ristorante Pizzeria Vabene are about 5-minute walk away.

The property lies next door to Ungelt Square along with Staroměstská subway station.

All units are equipped with high-speed internet, a microwave and a separate toilet. Each room has a hardwood floor as well as comfortable furniture. All units feature pillow-top mattresses, down comforters and feather pillows. A bathroom comes with a bathtub and a shower along with a hairdryer, dressing gowns and towels.

A kitchen is ideal for preparing home-cooked meals.

Ruzyne airport is about 20 minutes by car.

An aqua park and a golf course are provided on site. Guests will be able to enjoy activities including hiking and bowling.

The square’s center is home to a statue of religious reformer Jan Hus, who was burned at the stake for his beliefs in Constance. This led to the Hussite Wars. The statue known as the Jan Hus Memorial was erected on to mark the 500th anniversary of his death.

In front of the Old Town Hall, there is also a memorial to martyrs (including Jan Jesenius and Maxmilián Hošťálek) beheaded on that spot during the Old Town Square execution by Habsburgs, after the Battle of White Mountain. Twenty-seven crosses mark the pavement in their honour. The crosses were installed during the repairs of the Old Town Hall after the WW2, while a nearby plaque which lists the names of all 27 victims dates from 1911.

On , a Marian Column that had been erected in the square shortly after the Thirty Years’ War was demolished in celebration of independence from the Habsburg empire.

To the north the square is bordered by the eighteenth-century St. Nicholas Church. It is one of the most beautiful of all Baroque churches in Prague, and its interior is especially impressive.

Among the other buildings on this side of the square stands a profusely decorated building in Jugendstil style. It was erected at the end of the nineteenth century for an insurance company, but was later used as a government building.

At Christmas and Easter, markets are held on the square; they resemble medieval markets. A tall decorated tree and a musical stage are set up. 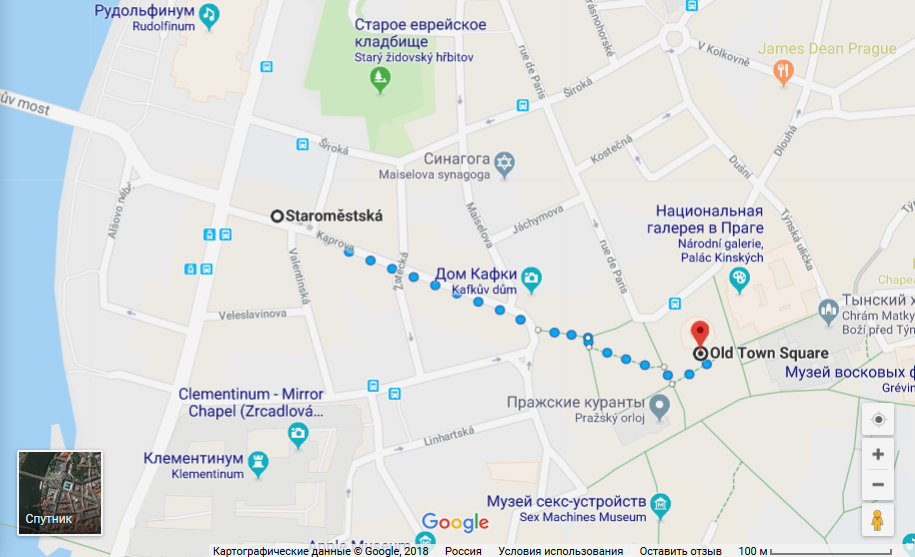 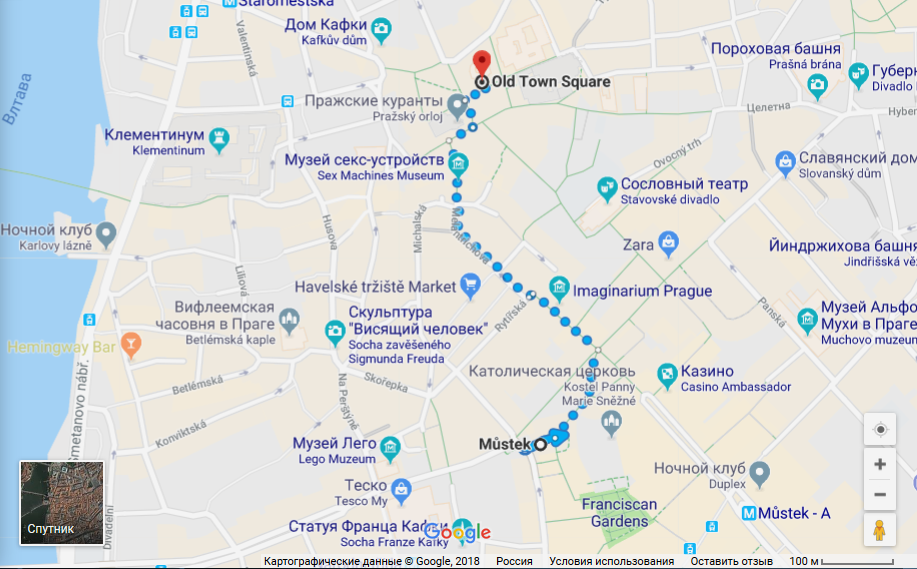 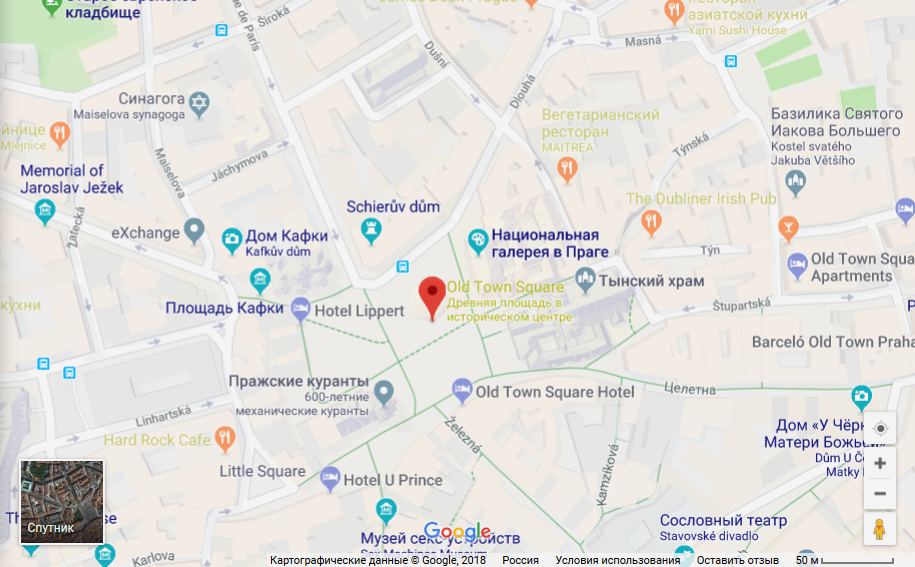 Kinský Palace (left) and
House at the Stone Bell (right)

To the left of the House at the Stone Clock is the Goltz-Kinský Palace, a beautiful building with a delicate Rococo facade. Originally built by the Goltz family, the building was later purchased by Kinský, a diplomat of the emperor. In February 1948 Klement Gottwald, the communist leader, held a speech from the balcony of this palace which would eventually lead to the proclamation of a communist state.

South Side of the Square

South Side of Old Town Square

The south side of the square is composed of a series of beautiful buildings with colorful Renaissance and Baroque facades. Some of the most notable buildings include the Štorch House, a Renaissance building with a painting of St. Wenceslas and ‘At the Stone Table’, a nice example of Baroque architecture.

Other buildings bear names such as ‘At the Golden Unicorn’, ‘At the Stone Ram’, ‘At the Red Fox’ and ‘At the Blue Star’. The names of the buildings were often derived from signs or plaques. The house ‘At the Stone Ram’ for instance is named after a stone relief on the facade that depicts a young virgin with a ram. These names had a practical purpose: in the past houses were not numbered so they were identified by their name.